“We need to find God,

and he cannot be found in noise and restlessness.

God is the friend of silence.

see the stars, the moon and the sun, how they move in silence…

We need silence to be able to touch souls.”

I’ve always contended that Nature is my Church.  I’ve tried organized religion and rarely find Spirit in the “house of God.”  Instead, I find Him in the silence of my soul when I talk with Him, when I watch His creatures in the wild and I observe the variations of this beautiful natural cathedral He created we call Earth.  However, I must confess that I also find Him in the ancient musics like Georgian chants, Latin hymns of my father-in-laws Episcopalian faith, Native American wooden flutes and the choirs of children.  Music transcends, and there’s something about not being able to understand the words that lend a mysticism.  I think about these things over the Christmas holiday. 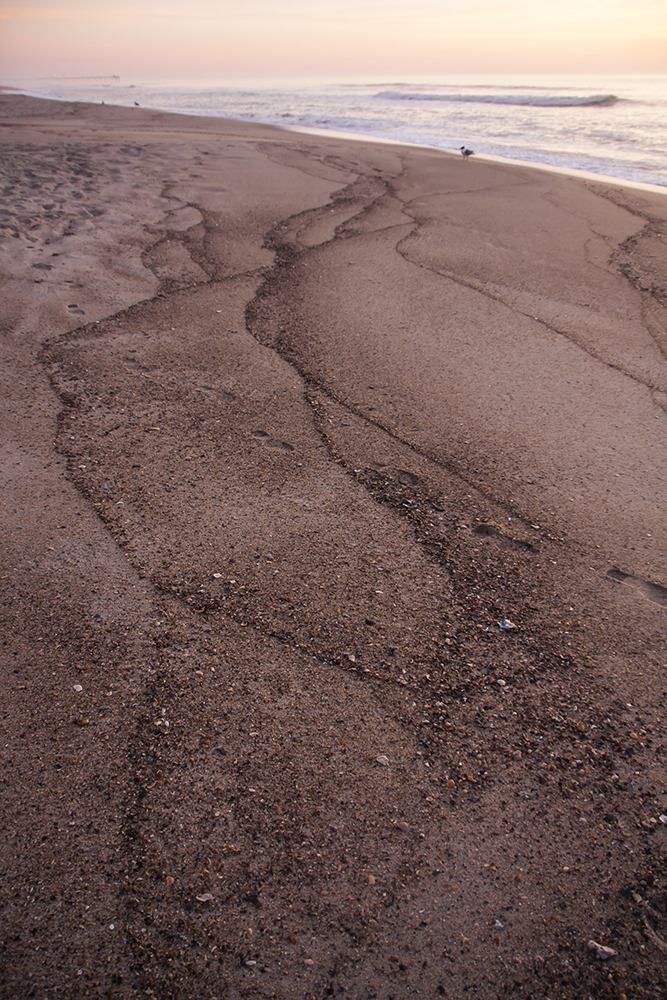 Funny how inspiration strikes unexpectedly.  From out of nowhere a voice, a song, an image, ……a comment….something jolts your inner creative and infuses a freshness of thought, a burst of energy.  That happened to me today from a comment that lead to exploring their blog to jumpstarting an old dream.  Like these lines of flotsam the sea created, above, my thoughts are going willy nilly but they’re all headed in the same direction.  I love Nature, and I definitely love The Sea.  Thanks, Anna.

“Let the beauty of what you love be what you do.”
Rumi

Sand reclaims steps to the beach

Last spring the beach underwent an intensive, and extensive, beach renewal program.  For months a huge barge floated offshore piping sand collected from the ocean bed onto the beach.  A herd of bulldozers carved massive pools in the beaches into which the sand was pumped out of massive black pipes.  Dark brown ocean sand blew high into the sky out of the wide open mouths.  That sand mixed with sea water filled the holes and seabirds swirled overhead, stood in streams and audaciously plucked stunned blood worms and mollusks and fishes out of the fray, screaming with delight.  It was carnage. 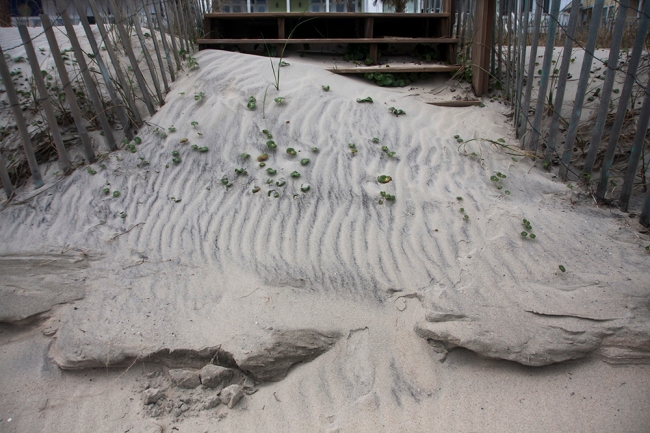 This is common practice along shorelines.  It’s not just here.  Man wants to build as close to the ocean as possible.  However, doing so they threaten the very environment within which they want to live.  They threaten their own homes, their own businesses.  Dunes and sea oats and dollarweed and a gazillion native beach plants are there for a reason.  They protect.  And, even with them Nature will not be denied.  Beaches change naturally.  Ebb and flow.  Nature reclaims its Sacred Space.

Build your houses if you wish and plan grand steps to take you to the beach, but this is what happens.  It’s inevitable.  The beach was “renourished” less than a year ago to the tune of over 5 million dollars and already that sand is gone.  It’s gone.  Only now are the shells beginning to return and the beach has returned to the shape we found it in when we moved here – undulating and steeper.  That’s the way it wants to be. 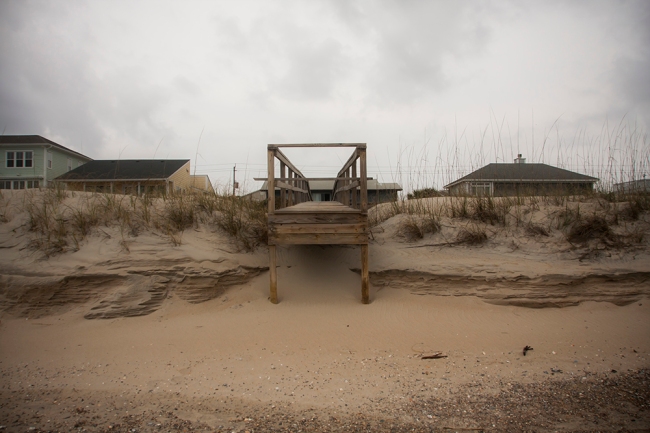 Last spring, after the barges and pipes and bulldozers finally left the beach I went to the beach to sit, to walk, to experience what they’d done.  The beach had easily tripled in depth and was flatter, sloping nicely out into the sea.  The disconcerting part to me was the knowledge that I was sitting on Sacred Ground.  The smell was that of decomposing sea creatures, and that odor lasted for weeks.  As the unrelenting ocean waves began tearing into the new sand I found during my morning walks the shells of lightning whelks, channel whelks, moon snails, lettered olives – shells that were thick enough to survive the trauma of being sucked off the ocean floor, rushed through thousands of feet of piping and thrown into the air.  The creatures within them were not so lucky. 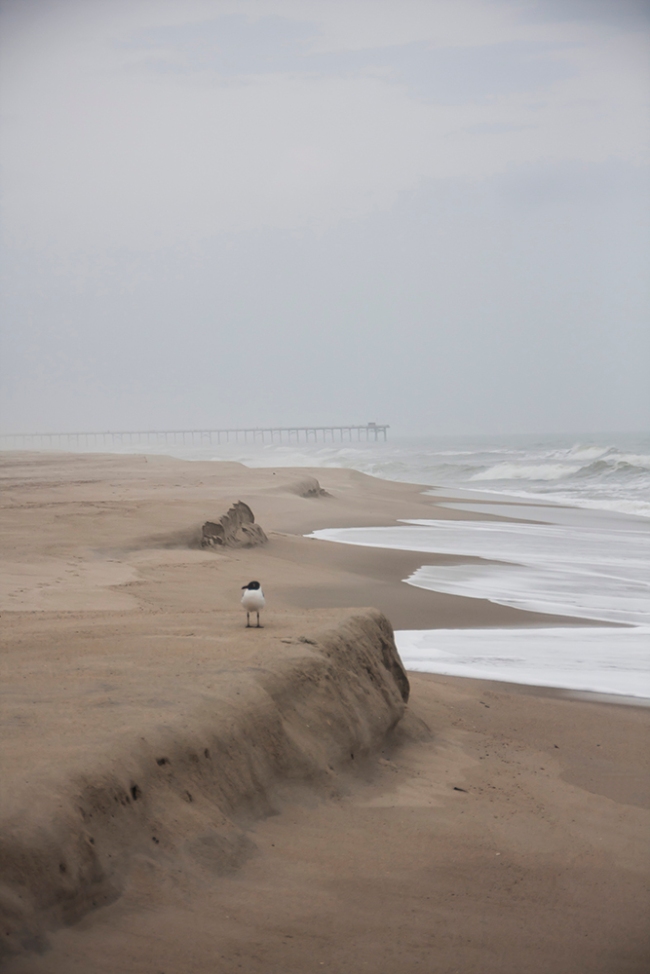 Unnatural cliffs of sand gradually eroding, going back to the sea

As the beach recovers the district is already planning the next renourishment.  Apparently, this is done every 3 years, give or take.  I am not looking forward to it.

Early in the morning, while the butterflies are still cold, it is easy to sneak up on them and take some good shots.

Bright orange glowed beneath my closed eyes like those of a jack o’ lantern at Halloween.  The sky was glowing well before the sun rose from the hillside.  I grabbed the camera and hustled to the dock below.  Standing above water glowing like molten lava I shot waves of tangerine, orange and gold both above and below, in the lake.  The show lasted about 5 minutes before the clouds ran together, blocking the sunrise.  Eventually, these outer bands of Hurricane Rita turned Wheeler Lake into the Red Sea as torrential rains drained the south’s red clay into the river.  Winds here in North Alabama reached 80 mph.  I could not imagine being any closer to the eye of such a beast.  It was an experience like no other.

Nature & Wildlife's Beauty and Behavior Through My Lens

The Humble Fabulist
BuddhistRonin - A personal journey through Buddhism.

"Taking the mystery out of Buddhism."

Just another glitch in the matrix

Identity Books
My Cabin Of Dreamz

Enlighten Before You Extinguish

Kym's All About the Bling

Unique one-of-a-kind jewelry with a creative and artistic flair!

the breezes at dawn have secrets to tell you... ~ Rumi

Solvitur Ambulando! It is solved by walking around.

This site is mainly about pictures, from the middle of Norway. Click a picture to read posts.

I'm Leah, a freelance Photographer born and raised in Macon, GA, USA. I spent 8 years in the wild west and this is my photo journal on life, love, and the spirit of Wyoming. Welcome to Uprooted Magnolia.

Photos of Birds, Bugs, and Buds

Be my guest but treat this with respect

Welcome to my Art and Lifestyle Blog. Follow my adventures as a Bohemian artist.

Sauntering through Life with a camera

through the luminary lens

Only the Sense of the Sacred can Save us

Journey of a body on this earth

Far Away In The Sunshine

Welcome to my inner world

“The Earth is Art, The Photographer is only a Witness ” ― Yann Arthus-Bertrand

one scooch at a time

Heal & Free Your Soul ~ In The Garden of Blessitude

"The artist exists because the world is not perfect" - Andrei Tarkovsky